Priyadarshini as a Playback Singer in Indian Cinema

Priyadarshini entered the Indian Film Industry as a Playback Singer in 2003 with the Tamil movie Kadhal Dot Com under the Music Direction of Ramani Bharadwaj with her debut song ‘Kadhal Kadhal’, a melodious duet with singer Hariharan. She flew from Singapore to India to record this song. Though she had her experience in live performances, TV shows, music competitions, and private albums from her childhood, it was a completely new experience to work for a movie with an established & notable Music Composer. 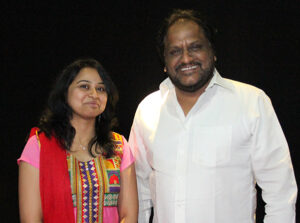 Priyadarshini was fortunate to receive guidance from him on her singing techniques & nuances in the recording session where he taught her every minute detail required for the song which was an unforgettable first experience at the AVM Studios. Sooner, her expansive vocal range, crystalline sweet voice with hard work and dedication in music brought her many such opportunities where she sang many melody songs for movies. Priyadarshini did not stick to the melody genre of singing but also explored other styles of songs. She got an offer to sing for the popular Tamil movie ‘Kusthi’ directed by Rajkapoor where she sang a peppy song ‘Masala Maharani’ for Music Composer D.Imman picturised on star-studded cast Prabhu, Karthik, Manya, Latha, Y.G. Mahendran, Vijayakumar, Vadivelu. In this song, she deviated from her usual melodious style and modulated her voice to suit the peppy number where she proved she could sing various styles of songs which brought her a lot of appreciation. She then worked with D.Imman for several movies, jingles and background scores. Priyadarshini stepped into Bollywood with the movie ‘Garam Masala’ starring Akshay Kumar, John Abraham, Neha Dhupia, Daisy Bopanna for Music Director D. Imman for the song ‘Ye Dosti’ and background vocals.

Priyadarshini began receiving offers from other Indian film industries including Telugu, Kannada and Malayalam. She made her debut into Telugu Film Industry with ‘Simha Baludu’ starring Arjun Sarja, Simran, Ashish Vidhyarthi, Vijayakumar, Music Composed by Manisharma. Later she sang for movies like ‘Giri’, ‘Bommalavari Veedhulalo’ a duet with singer Karthik, Music by D.Imman starring Arjun Sarja, Divya Spandana, Reema Sen, Prakash Raj, ‘Chinna Pagulunna’ for movie Manikyam 420 where she had an opportunity to work again with Music Composer Bharadwaj for a Telugu movie and many other movies and become one of the prominent singers of Telugu Film Industry. She debuted into the Malayalam Music Industry with the song ‘Premam’.

In the year 2004, Priyadarshini entered the Kannada film Industry with the song ‘Ee Premadaramba’ from the movie ‘Ajju’ under the Music Direction of Rajesh Ramanath, a melody duet with singer Rajesh Krishnan. She made a strong base in the Kannada film industry and worked back to back for many prominent music composers singing several melody hit songs. She lent her voice for the superhit movie ‘Julie‘ starring Dino Morea, Ramya which was the remake of the Hindi movie ‘Julie‘ starring actress Lakshmi. The  soulful track ‘Yeh Raatein Nayi Purani‘ originally composed by Rajesh Roshan, sung by Bharat Ratna Lata Mangeshkar was retained in the Kannada movie by Music Composer Rajesh Ramanath. Priyadarshini got the opportunity to sing its Kannada version ‘Ee Haadu‘. Singing it without imitating the veteran singer was a challenge, this song became a hit and became a landmark song in her film music career. She also sang another soothing song ‘Navanitha Chora‘ in the same movie which was also well received by the audience. 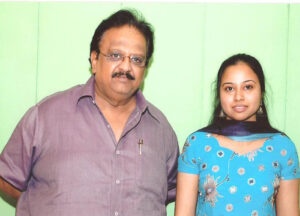 She has lent her voice alongside Singer Mano for the song ‘Nanagu Ninagu’ for the movie ‘Bangalore Metro’ starring Naveen Krishna, Music Composed by Ravish A.T. which is slated for release. This song is a 80s blockbuster hit which has been reused from the movie ‘Nyaya Ellide’ starring Shankar Nag originally sung by S. P. Balasubrahmanyam, S.Janaki, Music Directed by Chakravarthy, Lyrics Chi. Udayashankar.

In recent times, in Tamil Movie ‘Naan Than Bala’ starring Film Actor Vivek in the lead role, she has sung an unforgettable song ‘Thiruvai Mozhi azhaga’ penned by veteran Lyricist Vaali which is considered to be the last song he wrote before his death. For the same movie ‘Naan Than Bala’ she also sang ‘Uyire Unakkaga’ with singer Srinivas, Music Composed by Venkat Krishi. This movie’s audio was released by Music Composer A. R. Rahman, Directors K. Balachander, Bharathiraja & Mani Ratnam. 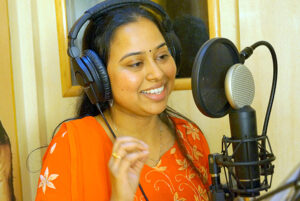 She has sung songs and also worked for the background vocals for the Tamil movie ‘Maaligai’ starring Andrea Jeremiah, directed by Dil Sathya, produced by Rajesh Kumar & Kamal Bohra.

Priyadarshini has lent her voice for many movies along with Legendary & leading playback singers like S. P. Balasubrahmanyam, Mano, Hariharan, Srinivas, Madhu Balakrishnan, KK, Karthik, Ranjith, Mukesh and other singers.

Priyadarshini has also worked for many background vocals in movies, to name a few Rocky, Nannedeya Haadu, Naan Than Bala, Ennathan Pesuvatho, Garam Masala, Maaligai and others.

Priyadarshini as a Lyricist