Priyadarshini was born on May 7th in a Tamil Brahmin Iyer family in Chennai, India. Her father Shri. Ramachandran is a Chemical Engineer and mother Smt. Sumathi, a former Government employee. 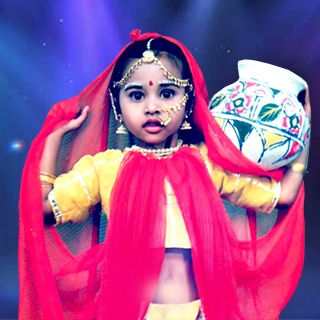 Priyadarshini dance performance at Kalakshetra, Chennai at the age of five

Priyadarshini’s Kindergarten schooling was in Kalakshetra, Chennai. She had immense interest in music and possessed the ability to identify ragas at the tender age of three and a half. On seeing her interest and abilities, her father took initiative to put her in the music and dance classes. He would encourage her by getting her the necessary music listening materials to enhance her learning process. She learnt Carnatic Vocal under the guidance of Guru Smt. Sharadha Swaminathan and Bharathanatyam under Legend Shri. V. P.  Dhananjayan’s Disciple Shri. Suryanarayana Murthy. Her grandfather Shri. Balasubramaniam would take her to the music and dance classes. She was more interested in learning music and as days passed by, baby Priyadarshini was able to learn Varnams which was astonishing at that tender age. At the age of six and half, she was able to sing Raga Abhogi Varnam ‘Evvari Bodana’, Raga Mohanam Varnam ‘Ninnukori’ effortlessly. 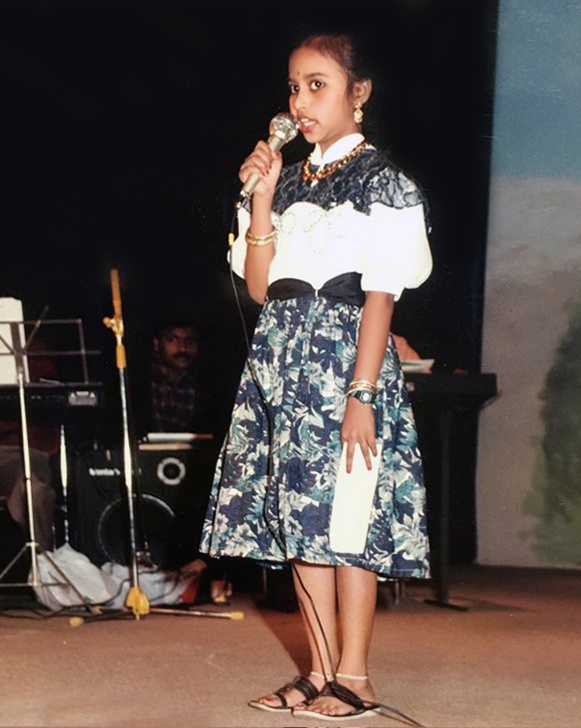 Later her family moved to Doha, Qatar where she spent most of her early childhood. She did her primary schooling at M.E.S Indian School. Since it was an Arabian Country, she could not find the right Carnatic Vocal teacher to continue her singing lessons. She continued to learn Carnatic Music under her grandmother Smt. Sarojini, a graded artist at the All India Radio and a disciple of Shri. Musiri Subramanya Iyer.
Priyadarshini was able to grasp nuances and learn the tune of many film songs by just listening to it. As part of her school curriculum she was exposed to Western Music and underwent training in Electronic Keyboard. She got an opportunity to sing a film song for a Show in Qatar’s Tamil Sangam. It was the first mega musical show in Priyadarshini’s musical career with full fledged live orchestra and huge audience. She sang the popular film song ‘Sundelikkum Sundelikkum’ from the Tamil movie ‘Kaithi Kannayiram’ sung by Legendary Playback Singer M. S. Rajeswari, Music by the Legend Shri K. V. Mahadevan which she learnt from her mother Sumathi. The audience were stunned and she got a huge round of applause and appreciation. This made her develop a stronger interest in singing Indian film songs and seeded the dream of becoming a Playback Singer. Later, she was a regular performer in monthly recitals and annual programs in Doha.

In the year 1993, her father received a job offer and the family relocated to Singapore. She continued her primary education at Boon Lay Primary School and then Northland Primary School, Singapore. She was an active participant in many cultural shows. She then became a child artist for Television shows at the Singapore Broadcasting Corporation like ‘Chinna Kanmanigal’ and pursued her singing career alongside her studies. She completed her secondary education at Yishun Secondary School where she was called ‘The Nightingale’ of her school. Her intense love for music was evident right from her childhood days on seeing her participation in numerous music competitions where she won several championship trophies in inter-school competitions making her parents and school proud. She also continued her advanced vocal training in Carnatic Music more under Smt. Sharada Shankar and after  her passing away, Priyadarshini continued her learning for a short duration from Guru Smt. Bhagya Murthy. She continued her Western Music under Legendary Cine Musician Shri. Radha Vijayan in Singapore who is the Lead Guitarist for many renowned Music Directors including Legend Shri. M. S. Viswanathan. She was a big fan of Bollywood Actor Rajesh Khanna and Ghazal king Mehdi Hassan. She learnt a bit of Hindustani music & Ghazals under Pandit Shri. Charan for a few years at Nrityalaya, Singapore. During her school holidays she used to visit India where she learnt Guitar under Legendary Cine Musician Shri. Sada Sudarsanam who is the Lead Guitarist for Maestro Ilaiyaraaja.

Priyadarshini has always been an outstanding student who scores distinction in her studies, and was also very actively participating in her school’s cultural activities. Her leadership qualities made her serve as the Member of Student Council for more than four years during her school days. She also underwent short term training in ‘Building Together: Leadership in the Making’ at the National Community Leadership Institute (NACLI), Singapore as part of her Student Council Program.

Her kind nature, care for the underprivileged, senior citizens abandoned by the children, specially abled made her to involve in community service by visiting Sri Narayana Mission Home, Sunshine Welfare Action Mission Home etc. As a true citizen she also participated in the Sembawang Beach Cleanup and fund raising activities.

Priyadarshini also actively participated in Sports & Physical Fitness. She received Bronze Standard in the National Physical Fitness Award Test and many prizes in Sports Meet Activities. She also underwent training in Table Tennis and represented her school for a few competitions.

During her High School at Yishun Junior College, there was a turning point in Priyadarshini’s musical life. She won the championship trophy once again in the tertiary category in Singapore Radio Oli 96.8’s Singing competition. The special prize was a trip to India to meet the popular personalities in the Film Industry and Indian classical music field. It was a dream come true for this young girl to fly from Singapore to India to meet and interact with Film stars like Music Directors Maestro Ilaiyaraaja, Deva, Vidhyasagar, Karthik Raja, Yuvan Shankar Raja, Actors Kamal Haasan, Ajith Kumar, Mammooty, S.Ve Shekar, Manivannan, Karan, Actresses Devayani, Khushbu, Playback Singers K.J Yesudas, Unnikrishnan, Nithyashree Mahadevan and many others. 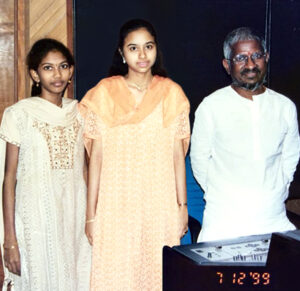 Priyadarshini with Maestro Ilaiyaraaja in the year 1999

She pursued an undergraduate degree in Electrical & Electronics Engineering at the world class Nanyang Technological University, Singapore. During her course of engineering study, in the year 2003, she had the opportunity to enter the Indian Film Industry as a playback singer to sing for films. It took everyone by surprise when she was offered a chance to sing for a Tamil movie Kadhal Dot Com by Legendary Music Director Ramani Bharadwaj. She flew from Singapore to record the song ‘Kadhal Kadhal’ with veteran singer Hariharan. This was an unforgettable moment in Priyadarshini’s life and her childhood dream of becoming a playback singer came true. Later she got many opportunities to sing in Kannada, Telugu and other
Indian language movies. Priyadarshini completed her Bachelor’s Degree with First Class and received many offers from MNC companies. As she was already a notable singer in the Indian Film Industry, Priyadarshini decided to take up music as her full time profession and pursue her career in film music. Even after many years of music learning Priyadarshini always felt learning is a lifelong process. She continued learning Carnatic music under Smt. Latha Ramchand & Smt. Mangalam Shankar.

Quick Links in About Section