Priyadarshini was born into a Tamil Iyer family which shares music as its passion. 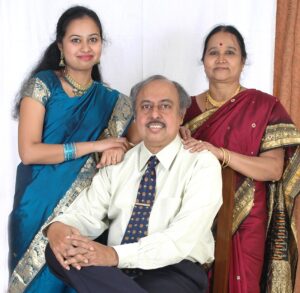 Her father Shri. Ramachandran, a Singaporean is the Former Director of India Operations, Tecnicas Reunidas, a Spanish Engineering Company. He holds a Master’s Degree in Chemical Engineering from the Indian Institute of Science (IISC), Bengaluru with immense work experience in Oil & Gas, Petrochemical industries across the world. He is the founder of  PRISM Foundation & PRISM Recording Studios. He is also a philanthropist, an ardent Music Lover & a Table Tennis champion.

Her mother, Smt. R. Sumathi is a homemaker who has worked at the Education Department, Secretariat, Government of Tamil Nadu, India prior to the family’s relocation to Singapore. Hailing from Thiruvaiyaru, a musical heritage city renowned for its association with Saint Thyagaraja, she sings and has also undergone tutelage in Carnatic Music at the renowned Tamil Nadu Government Music College, Thiruvaiyaru.

Priyadarshini’s paternal grandfather Shri. Balasubramaniam identified her unique ability to identify ragas at the age of four. Her grandmother Smt. Sarojini was a Carnatic Vocalist, a Graded Artist in All India Radio and a disciple of Legendary Carnatic Vocalist Vidwan Shri. Musiri Subramanya Iyer. 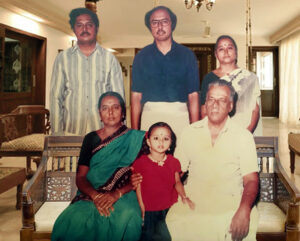 Priyadarshini’s maternal grandfather Shri Ramachandran Iyer was a music enthusiast & Smt. Lakshmi had a strong base in Carnatic music, both hailing from Thiruvaiyaru.

Priyadarshini’s paternal great grandfather Shri S. M. Subramanya Iyer (also known as SMS) who belonged to Kollam, Kerala owned a booming business. It is said that his huge bungalow had two elephants during those days between 1900s-1930s. Almost all kinds of musical instruments were in use in this bungalow. It is said that Kings (Maharajas) visited the house and many Legendary Musicians sang for celebrations.

One can visualise the love for art and strong cultural values running in the family of Priyadarshini as her paternal great grandfathers Shri S. M. Subramanya Iyer, Shri Muthuswami Iyer (father of Shri. S.M. Subramaniam Iyer) has built Temples Sri Lekshmi Nada Major Sri MahaLekshmi Mahadevar Temple, Kollam which is a very rare and unique temple where Goddess Lakshmi has Lotus in all four hands. They has also built Veera Raghava Perumal Temple & Sastha Temple, Naduvakurichi and which is now believed to be more than 100 years old.

Priyadarshini has been nurtured by her parents & grandparents in her love for music and they have been her pillars of strength in encouraging, motivating and supporting her to reach greater heights in music. She attributes her success to her father Ramachandran who has been a constant source of inspiration, energy, support and motivation to her musical odyssey. She is grateful to her mother who has been an embodiment of love and care, always standing by her, supporting and pushing her towards her goal.

Quick Links in About Section